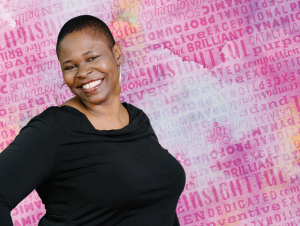 “I’ve always lived on the fringes,” says Sagashus Levingston. Poor black girl from the South Side of Chicago. From a family that wasn’t always safe. Woman left for dead by her abusive boyfriend, plastic bag pulled over her head and tied around her neck. Single mother with six children from four different fathers.

But she transcended her situations, always knowing, she says, “I had to fulfill the vision of being great, of inspiring and mobilizing others.”

Today she’s a University of Wisconsin Ph.D. literature candidate. “And it makes sense, now, that I still live on the fringes,” she says of her decision to eschew a traditional professor’s job, something cushy and secure compared to where she’s been and where she’s headed, to work with women who may never be in a college classroom.

Levingston launched Infamous Mothers last year, her innovative startup—a business and book with the fecund makings of a feminist movement—focused on lifting up black mothers who, like her, come from the fringes of society: sex workers, addicts, convicts, welfare queens, teen and single moms who live with the real fear or agony of losing their children to the system—and “all the things polite society shuns,” as Levingston’s website puts it.

“The work I do challenges norms,” says Levingston, from the focus of her dissertation down to the for-profit structure of her social-mission business. She is, says business coach Amy Gannon of Doyenne Group, “smashing paradigms.”

Levingston is emphatic: “It’s about a national commitment to invest in and unharness our power and talent so that it is normal for more women like me to become doctors, CEOs, journalists and so on.” Levingston wants to disrupt oppressive practices taking place from the bedroom to the boardroom.

“Levingston’s movement begins with the black women’s experience. But its reach will grow,” says Gannon. “Already, a whole range of women are identifying with the notion of Infamous Mothers which is: Stop disappearing us.”

“She is relentless and unstoppable,” says Gannon of Levingston. “This will be a powerful model across the country.”

In 2016 alone—in addition to being a scholar and a busy mother raising kids ages 2 to teen—Levingston launched her company, website, social media presence and a successful Kickstarter campaign that raised $25,000; she began producing a book; spoke widely, including at TEDx Madison; taught at the UW’s Odyssey Project, YWCA and Catalyst House; and did field research with and for Infamous Women to build a personal growth curriculum.

This year Levingston will pilot a membership plan and platform for Infamous Mothers that includes networking; community building; and personal, parenting and professional development for this class of women who could never afford that luxury. It’s rolling out from Madison, across the web and on a 15-city national tour. The tour culminates in February 2018 with a documentary release and the movement’s first national conference called “The Talk Back.” Hoping to cultivate Madison as the hub for the disruption, it’ll feature conversations with the experts—Infamous Mothers—for people of all stations, careers and colors. It’s not, she says, “just about black issues for black people.”

And then there’s her self-published book, “Infamous Mothers: A New Vision,” due out in April, which she hopes could be a UW Big Read selection.

In it, Levingston unapologetically shares the gritty stories of women like her who have succeeded not in spite of but because of their lives’ situations. For her it’s about storytelling, but also living “without trying to amputate parts of me to fit into another box.” And that is the very crux of Infamous Mothers, a phrase she coined in her doctoral research on 21st century literature throughout the African diaspora.

In her scholarship—and examples from her own South Side Chicago life—she found that the stories ended with the shunned woman turning a new leaf, so to speak, but not influencing the community. “I wanted to know what was next for these women— not that the extent of your greatness was becoming sober,” she says, incensed. “Where was the, ‘I am phenomenal, amazing and going to change society?”

“Infamous Mothers” fills that societal void. A coffee-table book featuring sumptuous portrait photography and an interview format, it allows 22 women to tell their own stories of struggle and eventual success; eight are from Madison.

“We’re the new hot thing because no one has seen us before,” says Levingston. “I want all Infamous Women to see, ‘Here’s what you have—and you can make it into something beautiful.’”

Levingston’s platform is both the fulcrum and megaphone for that reveal. “Infamous Mothers is about legacy-keeping also— the written documents you leave behind. I am disrupting the conversation now—and into the future. I am hoping to build a body of work and information that people will refer to that will make a difference for women like me. There’s a power we often forget.”

Like the power of Lolita Phillips, featured in the book and a Levingston protégé, who has come out the other side of crack addiction to a career as an employment specialist with Forward Development Corporation. “Working with people is my power— and what’s happened in my life lets me do great work doing that,” and, she says with resounding conviction, “I am ghetto-fabulous.” Finally at age 49, she believes her own worth and capacity.

Infamous Mothers is about that kind of self-wisdom. Levingston’s own name is a spelling riff on sagacious—wise, sage, shrewd. Her father, a crack addict and dictionary reader, found it in the tome. Interestingly, on the page it was opposite the word salacious, she says. “I used to joke with him: only one letter’s difference between the podium and the pole.”

Today she stands at the intersection of those two worlds, marrying the sagacity of each to forge a bold way forward.

In 2016 Levingston was honored by the UW as an Outstanding Woman of Color. She is intentional about its meaning for her: “Making it out doesn’t give me a pass,” she says. “It’s not about saving people or charity,” she says. “They want to build their own communities and resources. I never forgot that.”

“The role of my business is to disrupt stereotypes around black mothering,” says Levingston. “The work I do focuses on the humanity of mothers. This is my passion. By creating a safe space for mothers to think about their own self-care, their own vision for parenting, their legacy, etc., we are empowering them—as well as all who are under and within their care. I think that’s revolutionary.”  –Kate Bast