Relentless in Law, and Chocolate 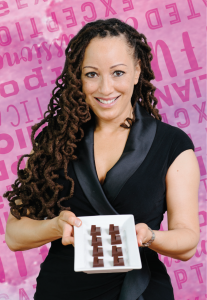 Ask Syovata Edari how she became a successful criminal defense lawyer and chocolatier and she’ll answer frankly, “I do what a lot of people fear—that is to risk failure and embarrassment in pursuit of a dream or what you know is right. ‘Success’ is the journey in pursuit of your passion.”

Edari’s tenacity is undeniable; as a single mother, she put herself through law school. Later, she overcame tremendous hardship in a profession that’s not always welcoming to diversity, serving as one of only a handful of Wisconsin attorneys of color practicing criminal defense in federal courts. It was during these hard times that Edari took refuge in the kitchen, finding relief in the science of chocolate. It wasn’t long before friends and colleagues took notice of her unique flavor profiles—many inspired by her East African, Iranian, Russian and Irish roots—and her part-time hobby became the company CocoVaa Chocolatier.

After representing high-profile Madison cases like those of Anthony Limon and Genele Laird, Edari’s move from law into unchartered career territory might surprise some. Yet her passion for the chocolate arts is undeniable, and, as Edari admits, she’s a “rule changer/ground breaker” type of person. Coming from a long line of intellects and social activists, she explains: “We don’t give up. When someone says ‘you can’t do that’ we ask: ‘why not?’” – Elle Duncombe-Mills

Written By
BRAVA
More from BRAVA
In Soyeon Shim's keynote address at the 2018 THRIVE Conference, she will...
Read More