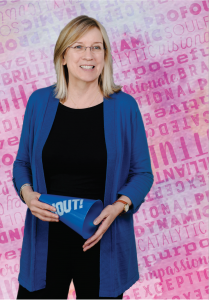 Erin Thornley Parisi’s career path could be summarized in one phrase: service to others. She found her passion at age 28 when she returned to the University of Wisconsin where she majored in behavioral science and law and studied the prevalence of sexual assault in violent relationships.

Thornley Parisi has spent years working on behalf of disenfranchised populations. Her work took her from a position as a state legislature aide to directorships with The Wisconsin Coalition Against Sexual Assault, Canopy Center Healing and Family Support Services (serving incest victims and their nonoffending parents) and the Wisconsin Institute for Learning Disabilities/Dyslexia. But, while she sometimes worked outside the anti-sexual violence movement, in the end she knew she would always return to this work because she says, “Once you know what you know, you can’t unknow it.”

As part of her energetic efforts, Thornley Parisi has launched community outreach, collaboration and diversity initiatives at the center.

In 2017 she’s overseeing the center’s expansion of its education and outreach office, adding more staff members and a new emphasis on cultural diversity to serve more Latinas and African-American women. That includes joining forces with and raising funds for Lilada’s Living Room, an Afro-centric nonprofit that provides support for female sexual assault victims. Its founder Lilada Gee (a 2013 BRAVA Woman to Watch) will help Rape Crisis Center improve cultural sensitivity.

Thornley Parisi also plans to build a diverse staff that better mirrors Dane County’s population and grow its anti-sexual violence outreach and victim support by working across the community with law enforcement, schools, churches and various groups. “We want to collaborate with anyone who has access to people,” Thornley Parisi says. Longtime friend and the RCC’s board chair Lori Meddings, partner at Michael Best & Friedrich law firm, calls Thornley Parisi “one of the most passionate, influential and hardworking people” she knows. “Her ties to the community are strong, and this gives her access to resources and a tremendous support network for this movement. The RCC and Madison/Dane County are extremely fortunate to have Erin Thornley Parisi fighting the good fight.”

Thornley admits that she thinks a lot about how to serve more victims of sexual assault, and with the focus on dignity that infuses everything she undertakes. “Sexual assault is on the mind of someone in every family in Dane County. I don’t want anyone to be facing this alone.”  –Rebecca Anderson-Brown

Written By
Megan Glaeser
More from Megan Glaeser
By Livia King Whether you’d like to fly high or take to a...
Read More