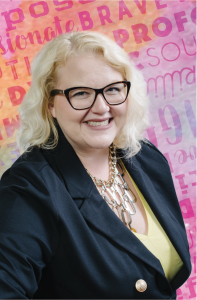 Ashley Powell knew she was worth six figures before she started at Bendyworks, a custom software development firm. At the time asking for that figure, laughs Powell, “made me want to vomit, because I really felt like I was taking myself out of the running for so many jobs.”

Now she gives “the talk” on salary negotiations, determined to bring more women into tech—an industry which reported 50 percent female employees in the ’80s, and reports only 20 percent today. She also wants to help women get higher-paid positions in fields like programming, which allow women to make a breadwinning salary.

Powell says the collaboration to grow opportunity within the tech industry here is tremendous. Companies are united in their mission to get Madison recognized as a tech hub, create jobs and bring more great developers to the area. “I’m really excited about tech in Madison. We’re starting to get a really good reputation nationally.”

Powell does her own part by co-organizing Madison Women in Tech, a group of over 700 members coming together to network, and helping with events like Forward Fest, Madison’s version of South by Southwest. And giving “The Talk,” helping women boldly move forward in the industry.

Written By
BRAVA
More from BRAVA
Children's Theater of Madison Erica Berman helps to ensure both families and...
Read More