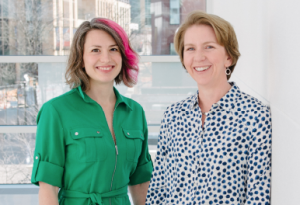 Everyone thinks their state is the best. Fortunately, we Wisconsinites get to be right. If you have any doubts, just ask Brijetta—Jet—Waller and Megan Monday, co-founders of the recently launched and aptly named Love Wisconsin project.

The project—housed at LoveWi.comand on Facebook and Twitter—celebratesthe people, places and attitudes that make our state great. Its founders hope it will foster connections between urban and rural Wisconsinites spread across the state’s 65,556 square miles.

Neither Waller nor Monday was born and raised in the Badger State, but the two quickly fell in love with the friendly culture, beautiful landscape and variety of craft beers. (Not to mention the abundant supper clubs and polka parties.)

“I was so impressed by the feeling of community,” says Monday. In 2008, she moved to the Madison area on little more than a whim. “Madison was meant to be another cool place to live …for a little while.”

She grew up mainly in Virginia but lived in several East Coast cities, including Baltimore and Rochester, New York, where she earned her master’s degree in art education. During her “vagabond 20s” she explored Europe, Asia, Central and South America and lived for a time in Southern California.

Waller, on the other hand, has Great Lakes roots. She grew up in Michigan but then moved on to New York, Los Angeles and Chicago, where she ran a documentary film company for several years.

During a 2006 snowstorm, she fondly recalls that she and her future husband were traveling to Madison to visit his family when they came across a car stuck in the ditch. Without hesitation, he pulled over to help out.

At the time, Waller was blown away by the generosity. Then she learned, “that’s just how Wisconsinites are.” They moved up to Madison the following year.

Waller and Monday first crossed paths at a 2010 community art project and it was a creative collaboration made in heaven. They began making films together and by 2013 founded Metta Monday Creative, a visual storytelling and marketing agency.

Love Wisconsin has so far been funded by donors and state and federal grants. Monday and Waller hope to grow that to include sponsors and crowdsourcing.

They make their way around the state looking for Wisconsinites to feature and getting to better understand their sense of place. So far, they’ve been to Wausau, Eau Claire, Milwaukee, Appleton and Stevens Point on trips that comprise a few intense days of interviews. Participants get in touch through the founders’ vastnetwork or through the website.

The project includes several series: Wish for Wisconsin, Wisconsin Portraits, Wisconsin Generations and Wiscostyle—a collection of standard Sconnie operating procedures, such as how to make Packer deviled eggs or assemble a proper sauerkraut and bratwurst meal.

The Wish for Wisconsin series has kids weigh—in with precocious honesty—on what it means to be a Wisconsinite. Wisconsin Portraits brings us snippets of daily life throughout the state.

But the series that contains perhaps the richest look at the state’s residents is Wisconsin Generations. On top of telling their personal story, which can be anything from volunteer work to professional wrestling, the featured Wisconsinites also mention how long their family has been in the state.

These stories are “authentic and real, and that’s why the stories resonate so well,” says Waller.

One gregarious standout story is Gorgeous Jordy Lee, aka Jordan Dietsche, seventh-generation Wisconsinite and professional wrestler. “Some people like to go hunting,” he says. “I get beat up every weekend in my underwear and baby oil.”

Volunteered by a friend to participate, Appleton-based Dietsche immediately became enamored of the project’s mission. He loves the state and loves to hear others’ stories as much as he enjoyed sharing his own. “Wisconsinites are just different,” he said. “They’ll give you the clothes off their back, get a hot meal in you and send you on your way.”

So, you might ask, why “love?” The project certainly includes a lot of celebratory content, Monday says, but it, like love, doesn’t skip over the tough spots. “Love is fierce. It is a change agent,” she says. “This project looks for hope.”

Written By
BRAVA
More from BRAVA
Madison-area executives share how their careers have shaped their lives — and...
Read More

0 replies on “A Sconnie Love Story”