to help save struggling birds, bees and butterflies
By Marni McEntee
Illustrations by Molly Krolcyzyk 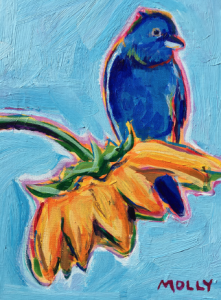 It’s getting pretty desperate out there for the creatures that pollinate our crops, particularly honeybees, but also for many kinds of butterflies, birds and other species that are key to putting food on our plates.

“Besides being beautiful to behold, butterflies are important in the grand scheme of things as a pollinator, along with bees and other insects, birds and bats,” says Cindy Cary, a chief horticulturist at Olbrich Botanical Gardens. “Pollinator protection is particularly crucial to the production of food crops around the world.”

In the last five years, 30 percent of the national honeybee population has disappeared. And, in the last 20 years, the monarch butterfly population that migrates to Mexico every winter has declined by 90 percent, according to the Natural Resources Defense Council.

Culprits for the decline in all pollinators are habitat loss, pesticide use, climate change and disease.

But we can help! And it’s a win-win. Planting the flowers, shrubs and trees that give pollinators the food and shelter they need will ensure the growth of the tasty things we consume, from coffee to apples to chocolate. And nobody wants to live without chocolate!

MILKWEED: Native Aesclepias tuberosa or Aesclepias incarnate are larval host plants for the monarch and the flowers are attractive to the monarch and other butterfly species, Cary says. The nationwide loss of milkweed,monarchs’ only food source and the plant on which they lay their eggs, is key to the butterfly’s decline, according to the NRDC.

CROCUS: A great pollen source for bees and butterflies, crocuses come in many colors and are one of the first signs of spring.

DANDELIONS: “No, really,” Clarke says. “They are the first really large source of both nectar and pollen [for bees] in spring.” If you don’t like them on your lawn, Clarke says it’s OK to mow them down after the first bloom. But that first bloom is critical for bees.

HELIANTHUS SUNFLOWERS:Many bird species, such as the indigo bunting along with chickadees, finches and eastern meadowlarks, love to eat sunflower seeds, Reetz says.

BEE BALM: This summer-blooming perennial, also known as bergamot, will attract “a bunch of bees,” Clarke says. And it smells good, too.

Written By
BRAVA
More from BRAVA
Opportunities for continuing education abound in the Madison area— and even a...
Read More

0 replies on “Make Your Garden Grow”