Kim and Jason Kotecki have the cure

When I meet Kim and Jason Kotecki, they are cozied up in a corner booth at Manna Cafe, on Madison’s East Side, wearing simple T-shirts: hers a vintage grey and covered in charming “Where the Wild Things Are ” characters; his a royal purple, with a cuddly looking skunk and the words “Adulthood Stinks.”

In front of Kim sits the pumpkin chocolate chip muffin we’d already bonded about over email. (Manna has “dangerously good homemade pastries—MMM!” she had warned. And she was right.)

Kim had closed each of her emails to me with the signature “Smiles & Shenanigans,” and I could already see that it suited her perfectly: She’s one of those people whose smiles went straight to her eyes. If you’ve ever offered a child a Popsicle and watched her eyes light up—that’s Kim. Jason’s eyes are equally kind, with that faraway thoughtfulness that dreamers and deep thinkers tend to have.

Right away, both of them feel like old friends, to the point where our first handshakes feel almost too formal. Like hugs, or at least some hearty high-fives, would make sense.

PICTURE THAT: WHAT IF WE ALL KICKED OFF BUSINESS MEETINGS WITH A ROUSING ROUND OF HIGH-FIVES?

In fact, it’s exactly the kind of question the Koteckis have been asking for years, Kim and Jason have built a successful career around helping people escape what they call “Adultitis”—literally, a “swelling of the adult.” “though it’s an affliction that’s technically made up, there’s no denying that we live in a culture riddled with it,

SYMPTOMS INCLUDE A DISTINCT LACK OF ZEST FOR LIFE, WITH MODERATE TO EXTREMELY HIGH STRESS LEVELS AND A GENERAL FEAR OF CHANGE. PATIENTS APPEAR CHRONICALLY DULL, EVEN “ZOMBIE-LIKE,” WITH THE MOST SEVERE CASES ALMOST COMPLETELY UNABLE TO SMILE. Their happiest moments exist mostly in fuzzy memories, before the burdens of everyday adulthood set in—jobs, bills, kids, needs, wants, expectations, disappointments, regrets,

Yes, it’s all a little tongue-in-cheek, but the underlying reality is painfully spot on: “the average American is slogging through way too many shoulds and have to’s, with nowhere near enough cans and want to’s,

So what can we do about it?

The Koteckis might suggest putting on a fun T-shirt, Playing hooky, Eating the frosting off your doughnut and leaving the rest, Celebrating when there’s nothing to celebrate, Dancing in your car (even—or especially—when people can see you), Wearing pajamas in public, Doing nothing on purpose,

Officially, Jason is an artist, public speaker and writer, With enormous support from Kim, kindergarten teacher turned event coordinator/client relations manager (aka “ Little Miss Details” ), he travels the country speaking about Adultitis and how to battle it, He’s written and illustrated several books on the topic, and also offers an assortment of thoughtful, whimsical prints, T-shirts and other fun products on the couple’s website, escapeadulthood.com,

(Oh, and the Koteckis are also raising three kids under the age of 7,)

But Jason has another title he finds even more apropos for his day job: He’s a professional “ reminderer, ”

“ I try to get the elephant out of the room for people who might have their arms crossed, like ‘what is this guy going to tell us?’ ” he explains, “Quite literally, I’m probably not going to say anything you’ve never heard before, “the problem is that we’re so often in day-to-day survival mode, we don’t think about some of that stuff we knew so well when we were kids,”

Jason’s other unofficial role: permission granter, “ It’s weird—it’s like people are just waiting for someone to give them permission to go after their dreams; to be themselves; to not take themselves too seriously,”

When he speaks to corporate audiences, he reminds managers that they, too, can be permission granters. But, really, that empowerment could extend even further: to friends, family members, coworkers— almost anyone you cross paths with.

Because in Jason’s experience, it doesn’t matter who the person giving the permission is. “ I mean, who am I?” he jokes. “ I’m just some dude on stage. But that’s cool, if that’s what it takes.”

The conversation reminds me of a print I’d seen in the Kotecki’s online shop, “the Lemonade Stand. One of Jason’s original illustrations, it features a box of chocolates with one chocolate having sprouted arms and legs—walking proudly and triumphantly away from the box. “the caption was: “ Pick Yourself.”

As successful entrepreneurs, Kim and Jason exemplify the Pick Yourself mindset. “they don’t sit around waiting for opportunities—they create them, “they pick themselves, and they refuse to be put back in the box.

Of course, it’s all much harder than it sounds. 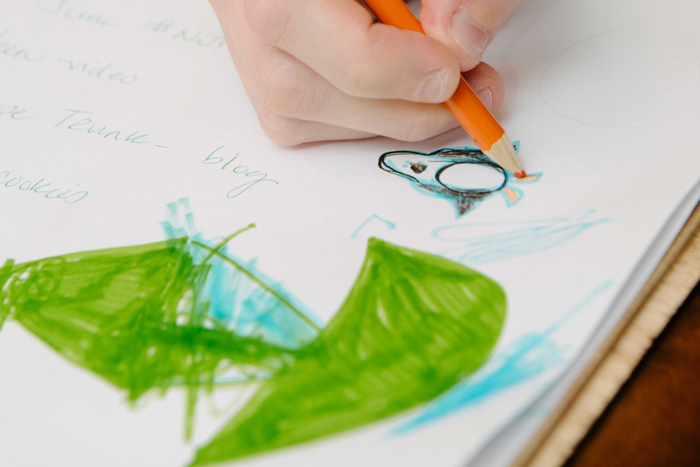 “People look at our life and see the freedom that we have, and all the good things about it,” says Jason. “ But what they don’t realize is that getting here was hard. It was a lot of throwing spaghetti at the wall to see what would stick. Constant fear of bankruptcy, long hours, lots of debt, living in an apartment… .”

“We talk about [the business] being our MBA student loan that was just trial and error—like, oh! “that didn’t work. That didn’t work. ” Kim, ever the optimist, giggles as she talks. “Fifteen years of overnight success!”

Jason’s entrepreneurial journey began in high school, when he had his first boring job at a car dealership. He hated it, because, he says, “you’re supposed to hate your job when you’re a teenager, right?”

But what surprised him was that he wasn’t the only one. “the full-time mechanics seemed to have the same attitude about work. “And I was like: “this is your job,” he says, “”this is your life. Why are you here, if you hate it so much?”

So teenaged Jason made a promise to himself. He’d do whatever it took to make sure he was doing something he loved. He studied art in college, with his eye on a job as a staff illustrator postgraduation. But by the time he got his diploma, he found that the majority of his dream jobs had gone freelance.

Today, the couple jokes about Jason being “unemployable,” but they say it with gratitude. As Kim says, “we wear it like a badge of honor now.” Because sometimes, it’s not until a door closes that you can clearly see the even better door next to it.

Finally, I had to ask the inevitable question: What’s it like being in business together as a (gasp!) married couple?

Kim was ready for it. “’that’s the number one question we always get. And then they do this under their breath—” she hides her mouth behind her hand— “ ‘I would kill him!’”

They talk about the importance of communicating effectively; playing to each other’s strengths and skills, and (of course) having fun. But really, what makes it work is the same formula that makes any business relationship work.

As Jason puts it: “Like any job you’re in, it just works better if you have respect for the people you’re working with, if you’re working on something that matters, if you feel a combined sense of mission and if you’re rewarded for your efforts.”

His wife puts the cherry on top: “”that just happens to be the relationship we have.”

The Kotecki’s top piece of advice for entrepreneur hopefuls?

“Tinker.” Jason pauses, letting the word hang in the air for a beat. “Just start on the side, do small things. If you like it, do more. Maybe you’ll never make money at it.” What? I feel my bubble deflate, just a little bit, until he goes on. “ But I tend to think that’s a self-limiting belief. We have a friend who blows bubbles for a living.”

These days, Jason’s doing 50 to 60 speaking events a year, each of them meticulously coordinated by Kim. “this fall, he’ll speak at Madison’s DreamBank. He also has a brand new book out: “ Penguins Can’t Fly (+39 Other Rules “that Don’t Exist),” which includes 40 deliciously tongue-in-cheek life rules, including “Thou shalt hate Mondays” and “”thou shalt brag about how busy thou art.”

The couple’s next adventure? An 18- day cross-country road trip/book tour with all three kids.

“We’re kind of doing it because it’s insane,” Kim says, laughing. “Almost to prove it to ourselves—that we’re not bound by expectations.”

ENTREPRENEUR EXERCISE The secret sauce for entrepreneurship is identifying the unique combination of skills you bring to the table, along with the specific lens you have to translate it all into something that adds value to society. How can you find your skill set and lens?

TRY THIS:
1. Think about your role models (people or brands). Chances are that the things you admire in them are also in you.
2. Instead of writing down their names, write down traits or words you associate with each one.
3. Step back and look at the unique combination of words you’ve come up with. You’re probably describing your best self.
4. Go be that person.

1. Try tinkering. If it goes well, do more. If it doesn’t, you can easily step back.
2. Instead of knowing all the steps, just know the next one.
3. Find (or create) the intersection of what you’re good at, what you enjoy and what people will pay for.
4. Invest in your personal growth, but pay for what you’re not good at.
5. Learn from others who are a few steps ahead of you, and help those who are a few steps behind.
6. Find people who believe in you.
7. Practice living with less, and get cozy with debt.
8. Know your push point. Where is the absolute threshold for stopping?
9. Be willing to go down wrong roads.
10. Don’t take it all so personally.
11. Instead of seeing failure as a waste of time or money, look for what it makes possible.
12. Just go one more day.

Written By
Haley
More from Haley
By Marni McEntee STEPPING INTO DEB GUNDERSON’S backyard, the pulse slows and...
Read More