Set your boundaries, know when
to break them
By Ann Garvin | Photographed by Shanna Wolf 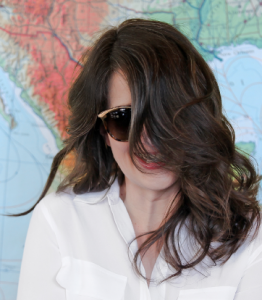 One of my first trips alone, I was a college freshman busing it home for my first Thanksgiving break. Wide eyed in the window seat; the ocean of sky overhead, a blanket of wheat beneath it and sidling up next to me an elderly man who, with a giant chunk of Cheetos in his teeth said, “Traveling alone?”

I talked to him far too long before the bus driver mercifully relocated him and plunked my backpack on the seat next to me. “Boundaries,” he said.

Maybe a year later, not yet 21, I drove to Vail, Colorado, in my silver Ford Granada. My plan was to figure it out when I got there. I spent my days applying for waitressing jobs in the morning, hanging by the pay phone (remember those?) in the bus station all afternoon and sleeping in my car every night. On the sixth day, a man my father’s age, after our lengthy conversation about the beauty of the mountains, said, “If you’re traveling alone, I’ll pay your college tuition to travel with me. No sex, just cuddling.”

“No thank you,” I said, just as the payphone rang, giving me a full-time nanny position and a whole summer in those mountains. I have always been polite in my horror even then.

Later still, in Egypt this time, just off riding a camel to the Great Pyramids and back, which sounds awesome but is, in fact, painful and sandy, the man who rented the camel said, “You have the sex with me and I drive you back to your hotel.” This time, I managed a whole sentence: “No I will not have the sex with you. I can walk,” and off I hobbled, grateful for the hot sun and wide-open spaces of the desert.

Traveling alone is a lesson in yes and no. It’s about openings and closings and trusting yourself and only yourself in making the decisions of who to let in and who to keep out, what gifts to accept and which ones to refuse. I’m getting better as I age, less polite, more willing to be daring but also to be judged boring, if that sets me free.

On a recent trip to New York, amid a subway bomb-scare, all the passengers were evacuated, released into the late-night, early morning air. I was miles from my hotel and before long I found myself in Chinatown trying to hail a cab with little success and no battery left in my phone. When a yellow cab pulled over, I jumped in, and the man gave me an extended, odd look. After a long, silent drive uptown, he pulled over in front of my hotel and said in a thick accent, “You are Sigourney Weaver, Ghostbusters, yes? You ride for free.”

“Thank you,” I said and as I walked away he gave me the thumbs up saying, “Who you gonna call?” and I said, “Nobody. I’m traveling alone.”

Written By
BRAVA
More from BRAVA
A wide range of services and employers throughout Dane County connect people...
Read More

0 replies on “Pack your pluck”