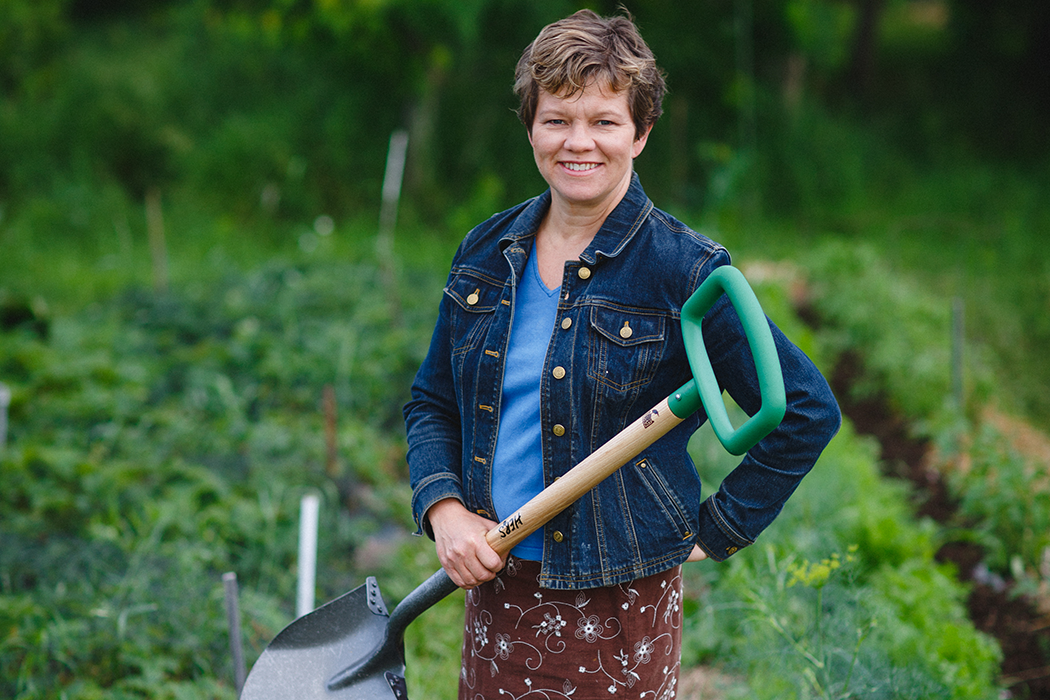 By Rachel Werner, Photographed by Josh Witzel
Close your eyes and conjure up the image of a “farmer” and you might see a middle-aged white man in flannel, loading a pick-up truck. In reality, farming is accessible to any gender and individuals regardless of race, ethnicity or education level. The USDA 2012 Census of Agriculture found women actually represent one of only two demographic groups who could counter the aging progression of the average American farmer. A growing number of women under the age of 55 now choose a form of agriculture as their primary or secondary occupation. While women currently control only 7 percent of U.S. farmland, they account for 30 percent of all farmers nationally. Women are helping to preserve and revive rural America —banding together as a sisterhood for assistance, inspiration and guidance.

The perceived bucolic charms and simpler life lure some women to the land. Lisa Kivirist, originally a Chicago suburbanite, always felt at home when she’d visit the Wisconsin countryside. “My husband John and I started as typical tourists crossing the border for the weekend, but ended up wanting to linger longer and eventually moved onto 5 acres outside of Monroe,” she says.

Kivirist says her life’s purpose has come full circle in the country. She and John now endeavor to equip others with the tools and knowledge needed to live self-sufficiently and in tune with the earth, growing their food and evaluating the daily environmental impact of their lifestyle.

As Kivirist’s rural interests grew, she realized that few programs and resources exist to address the specific needs of women farmers and food-based entrepreneurs. She feels strongly that rural communities can and should make farming accessible to any individual. Kivirist got involved with the Midwest Organic and Sustainable Education Service (MOSES) and now is coordinator for its Rural Women’s Project (RWP), an organization that provides training, outreach and a voice for women in organic and sustainable agriculture, both in the Midwest and nationally.

RWP runs programs to facilitate collaboration and support the growing number of women starting farms and food-based businesses, as well as to strengthen local food systems.

The project also builds committed, engaged partnerships with other nonprofits and agencies such as the Wisconsin Farmers Union and the Women, Food and Agriculture Network (WFAN).

Kivirist says organizations like RWP give women the platform they need to seek, in today’s food systems, the changes they are most passionate about. “I’m always nudging my fellow local female farmers to take on leadership positions. We need more women represented at the leadership table when it comes to agriculture, from county board to Congress,” she says.

Kivirist couldn’t be more proud of women farmers paving the way in agriculture. “As natural nurturers and connectors, women are driving this organic movement. We’re committed to caring for the land, transforming our food system and championing each other to succeed. We’re not each individual female farmer—we’re a family and a network of women with a vision for a healthier future for our communities and planet.”

The demand for more transparency in how our food is grown and produced is breathing new life into local food economies—and the need for ethical growing practices, which women are more than willing to spearhead. According to a 2015 report from the UW-Madison Center for Integrated Agricultural Systems (CIAS), “Organic farming tends to offer women more opportunities to engage in agricultural enterprises. Nationally, organic farms tend to have a higher percentage of women as principal operators than all farms: 14 percent of overall farms have a female principal operator compared to 18 percent of organic farms. By comparison, in Wisconsin, women farmers represent approximately 11 percent of primary operators on organic and all farms.”

Kivirist thinks the underlying connections of tending to one’s health, land and family are fused with the feminine instinct. “At the core level, farming is about caring for something bigger than yourself: the land. This perspective that we as women are caretakers and leaders of our future transfers to all the roles we play as we prioritize something bigger than just ourselves and just today. We want to collectively leave this world a beTher place.”

Indeed, the following local female farmers see each other as co-laboring peers, friends and mentors, working side by side to ensure a fruitful harvest and life. 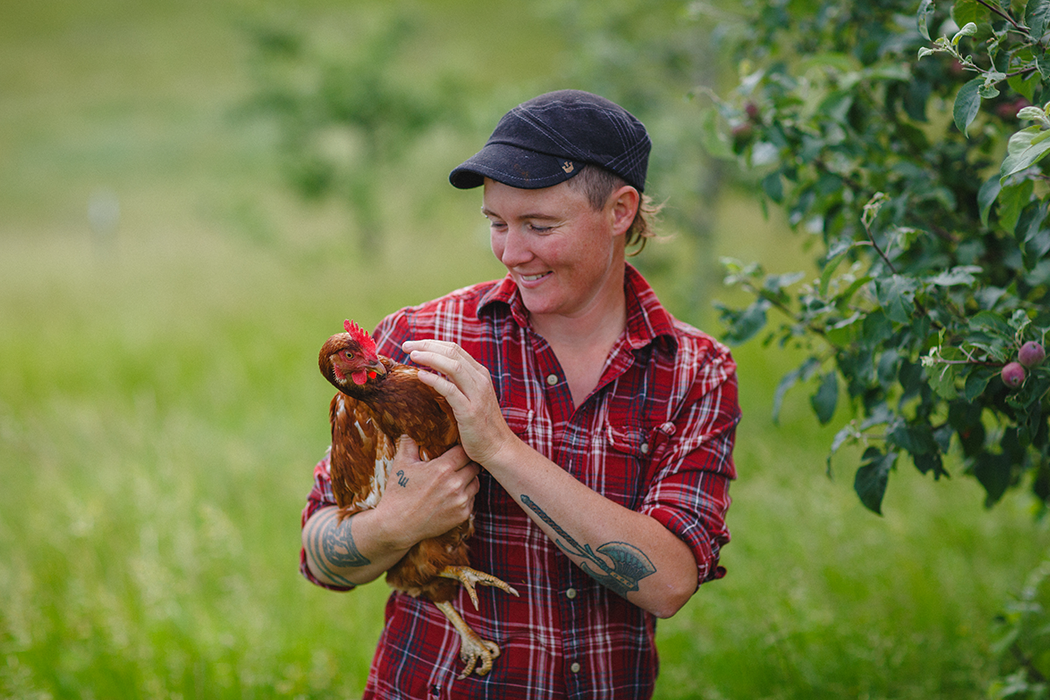 Lindsay Morris Carpenter came to farming for the art of it. During her childhood split between Southern California and Northern Wisconsin, Carpenter developed a natural talent and interest in painting, drawing and sculpture. Later, she studied art in Philadelphia until, she says, “My practical nature matured, and I realized fine art studies lacked a clear path to personal financial stability.”

Carpenter moved back to the Midwest to pursue a woodworking apprenticeship, but instead stumbled on an internship at a vegetable farm in Stoughton. “The experience proved providential: Carpenter discovered “the perfect career and lifestyle.” Farming, she says, grew her skillset. She’s learned about marketing, intricate crop planning, equipment operation and maintenance, bouquet making and animal husbandry.

“The property she now co-owns and manages with her mother Gail is a thriving certified organic and CSA farm with poultry and livestock. Grassroots Farm is a self-proclaimed “safe place for women, men, trans-people, queers, retirees, families, kids and people of all backgrounds to trade labor for fresh food and learn about small-scale organic agriculture.”

“The mother-daughter team—Carpenter does the bulk of the physical labor and has modified the equipment to suit her; Gail handles the books, canning, baking business and orchard—has built Grassroots Farm from the ground up. It involves hard work and a bit of hardship.

Carpenter says her mother works a full-time job in Chicago to help subsidize the farm, “This business of diversified sustainable farming does not provide much more income than the bare minimum of paying my personal, and modest, bills,” says Carpenter, ” The upside is I get to practice art in my own way through the creation that is farming. Good whole foods should be accessible to all, whereas fine art is typically accessible only to the wealthy and interested few. Perhaps relating to my customer base on the level of fundamental human survival is what keeps me here.”

She’s not the only young farmer digging in to the soil. As a millennial, Carpenter is among the growing number of young Americans—particularly women—who are choosing to farm, “The CIAS data reveals that 17 percent of Wisconsin’s traditional farmers are under age 45, and 29 percent of the state’s organic farmers are under 45. Twenty-three percent of Wisconsin’s organic growers have operated a farm for less than 10 years.

Based on her experience, Carpenter thinks men who have inherited the infrastructures and skills of conventional farming are more likely to farm with chemicals, big equipment and mono culture because of the pressures of agribusiness. In comparison, Carpenter thinks women coming into the field now have a more nurturing influence on the face of agriculture. She says,”As a gender, we tend to take more responsibility for our current and future community and family. Combine that with a tendency to think first before acting and the life-sustaining actions of eating and feeding, and it’s a natural union.” 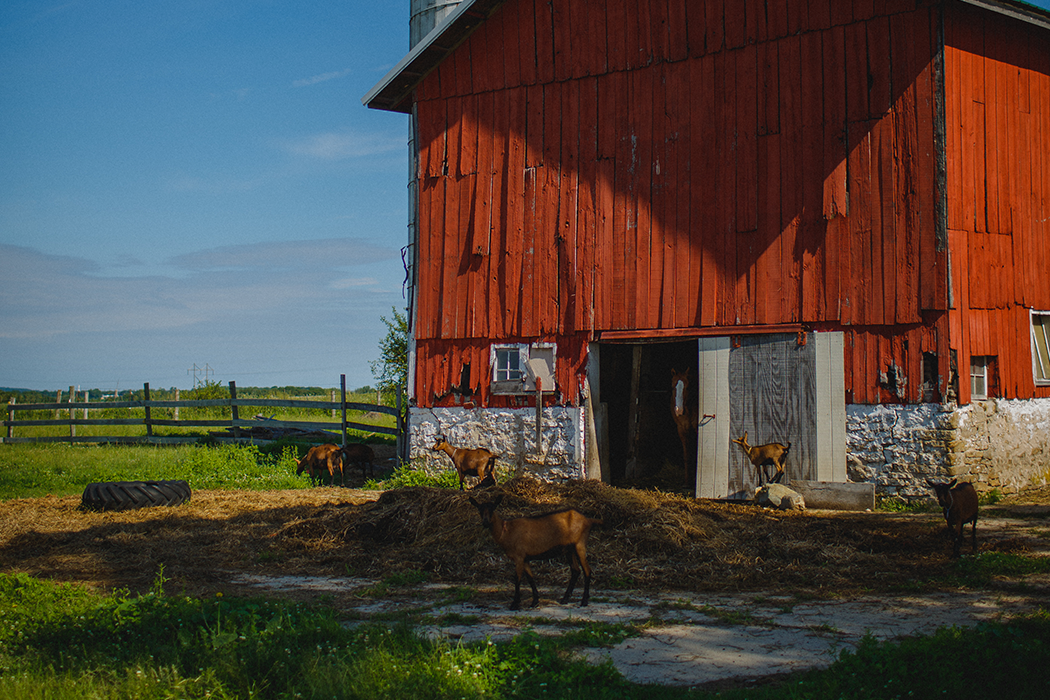 A connection to the land runs strong in Dela Ends blood. At age 19, Ends bought a book called “Living on the Land.” “I had a powerful gut feeling that this would be very important and when I had children, I felt strongly they needed to know how to grow their own food.”

It took almost 20 years for Ends to find a partner who was supportive and willing to help make her dream a reality. She married Tony, and they bought their property in 1993. Twenty-two years later, Scotch Hill Farm is a diverse enterprise with 75 varieties of vegetables, melons and herbs—the bounty that supplies their summer and fall CSA shares, “The property also includes fruit trees and perennial flowers, a few pigs and chickens, a small flock of sheep and a goat herd—the milk from which Ends uses to make farmstead soap for additional income.

“I never really thought it was unusual for me to farm because I was a woman. It was just what I wanted to do and what I love,” Ends says. “Many women have farmed over the years, but for some reason in our society only the husbands got the credit for being the farmer. My husband worked off farm for many years and I was the farmer day in and day out. Animals in particular require daily care all year round. All over the world women take the primary role in growing food to feed their families while men often go away to the cities to find work.”

“We used to be the only small- scale sustainable organic farm for miles around in my community, but over the years more small-scale farms have come to our community— all with women at the helm, either by farming solo or in partnership,” she says. “It is wonderful and hopeful to see this change happening. We face many challenges as we aThempt to coexist with conventional farming, but there is definite strength in numbers and we can work together to make farming more sustainable and safe.”

Over the years, Ends and her family have learned so much from witnessing the natural cycles of plant and animal life that comes with living on a farm. “We never had lots of money, but that is not what makes for rich experiences. As I get older, it pleases me to see my children moving into different aspects of ecoconscious agricultural work.”

Which is why, for Ends, being a female farmer also means nurturing other women in agriculture—both those who work on her farm or farther afield. Ends has been involved in sustainable farming groups like FairShare CSA Coalition and the Collaborative Regional Alliance for Farmer Training (C.R.A.F.T) mentorship program that connects experienced farmers with novices.

“With more women moving to the countryside, we have our South Central Wisconsin Women in Sustainable Agriculture group and the new South Central Chapter of the Wisconsin Farmers Union, which are great ways to be more closely connected to farmers living a bit closer together,” she says. “Communications are so much beTher now because we have the Internet to help stay connected.”

For Ends, the farmer connections span continents; with her husband she supports and leads Farmer-to-Farmer Training Projects in Senegal. Global initiatives such as these are the final frontier for Ends, allowing her to help beginning farmers and women in developing regions have a significant influence on the agricultural trends of the future.

“The need to promote sustainable farming is great everywhere in the world. With the challenges of climate change and all the toxins that have been forced upon us, we are on a crash course with disaster,” says Ends. “I strongly believe small-scale agriculture is our only hope. I want to make every effort I can to share my knowledge and skills to promote and encourage healthy and healing farming practices in the time I have left on this planet.”

For Ends, Carpenter and Kivirist there is little doubt that a female farmer’s life is well lived, allowing her to sow deep roots with happiness and influence on the cusp of blossom.