“If you don’t leave him, he’s going to kill you.” Christy* didn’t know how her four-year relationship with John*, had reached this point. But when a friend said this, Christy believed it and knew she had to get out.

She didn’t fully recognize the signs when the abuse began. “We were young and in college,” she remembers. “We had our normal bumps in the road early on, but I didn’t think I needed to do anything about it.”

Then Christy married John. And the bumps got bigger.

“If I did or said something he didn’t like, he wouldn’t talk to me for a couple of days. He’d say that was my punishment,” Christy says. “I would think, ‘What did I do wrong?’ I always tried to just smooth things over and move on past his bad mood.”

This became a game of avoiding topics and situations that might upset John, or embarrass Christy. John, an accountant, insisted on controlling their finances, which Christy accepted at the time, but now realizes it was just another way for him to control her. Even when she found he had been unfaithful, she stayed.

“He would stay out until 4 in the morning,” she says. “Then he’d yell at me and accuse me of saying something to upset him, and I began to feel that it was me that I had to fix.”

“Batterers want to be the primary voice in their victims’ heads,” she explains. “They will try to influence or limit the amount of access to other people in the victim’s life so the batterer can have more control over how the victim is seeing and experiencing the world, and how the victim sees herself.”

Christy vividly remembers one of the times John’s voice was the primary voice in her head. “We were at a wedding reception out in the country. We were slow dancing and he whispered in my ear, ‘If you don’t go fix your face right now, I’m leaving you here by yourself.’”

She ran to the bathroom, looked in the mirror, and realized she looked fine. No blurred mascara, no crazy hair.

“But I was suddenly afraid. Is he going to leave me two-plus hours away from home? I didn’t want to be embarrassed in front of my friends if he left me and made a scene.”

Jennifer Parker, a psychotherapist at Harmonia in Madison and founder of Women’s Voices—a program for women affected by controlling behavior and abuse—acknowledges that fear in a relationship does not always come from physical violence or threats.

“When someone has their perceptions continually negated, it feels threatening, and depending upon the power of that person to affect our lives, it is very normal to feel some fear, as well as confusion and self-doubt,” she explains.

Christy says she stayed with John because of her low self-esteem and naiveté, but Parker says this fear and control of perceptions is what chips away at the victim’s confidence in herself and creates low self-esteem.

“This leads to a feeling of being ‘crazy’, something that is often reinforced by abusers,” Parker says. “This results in self-doubt that paralyzes the victim from taking action.”

Christy admits she is also an eternal optimist and thought she could change John. “I didn’t want to fix him. I wanted to make him a better person,” she recalls. “The control and abuse were already happening when we got married, but I thought I could still change him.”

Eventually though, she lost control of everything…her finances, her friends, her family and trust in herself. “The loneliest place is a bad relationship,” Christy says. “I was embarrassed to tell anyone that he was doing this to me. I didn’t want to be judged. I didn’t think anyone would believe me.”

About two years into the relationship, John convinced Christy to move away from their hometown, with Christy given the responsibility of moving their things into a new apartment. John didn’t show up until two days later with no explanation. Christy remembers feeling angry, alone, afraid and confused. She decided to test the waters of her independence, and began pushing back—questioning John’s tactics. 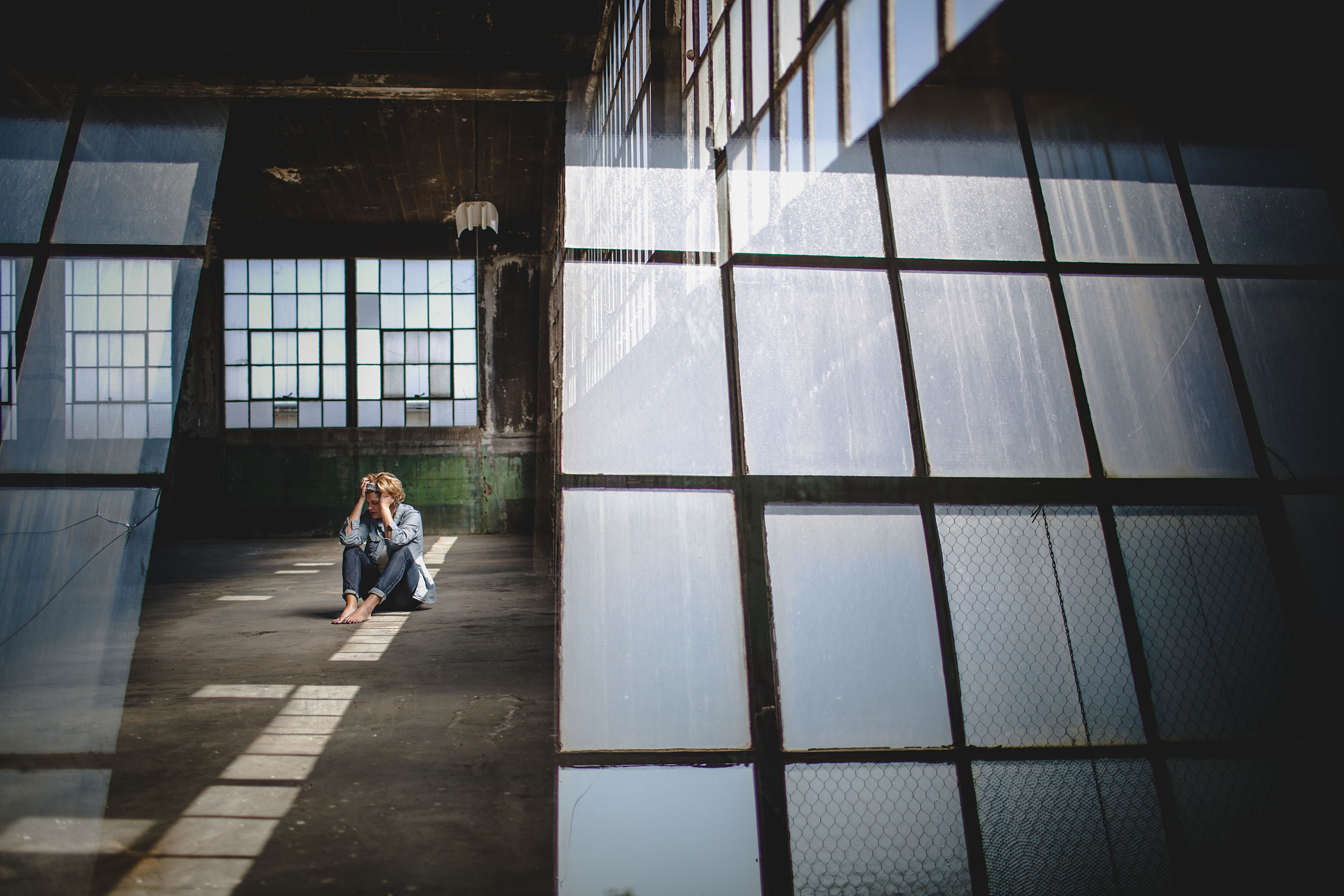 Barry says this is a dangerous time in a controlling relationship, because the batterers are doing their own form of testing. “They will use a tactic as long as it works, and when that tactic stops working, they will escalate the abuse,” she explains.

Parker says it’s often a gradual escalation from jealousy, to control, to isolation, and often victims don’t identify the emotional forms of control early on because they’re more subtle than physical abuse.

“Over time, they develop tolerance for things that would have been unacceptable early in the relationship,” she says. “However, when victims protest and question, abusers sense that their power is endangered and often escalate to physical abuse.”

When Christy started pushing back, John would push back harder, slamming her into walls, or throwing things at her head. “It wasn’t like these things happened every day,” she says, voicing a common reason why many victims stay in relationships like this. “You’ll have normal times just like any relationship, but you never know when the switch will flip.”

The day Christy opened her eyes was about four years into the relationship. She and John were attending a college reunion weekend with old friends and roommates.

“Something happened where he fell and cut his hand, and he was immediately yelling at me. Our friends saw it,” she says. “I got in the driver’s seat of the car and he slammed his bloody hands on the passenger window and screamed at me to let him in the car. I didn’t know what else to do. I was scared and didn’t want to make a scene.”

Crossing a bridge on the way back to the hotel, John threw the car into reverse. “Luckily it just stalled out, but what was the point? If I went, he went too,” she says with a shaking in her voice all these years later.

Back at the hotel, Christy’s friends, also shaken by the incident, confronted her. “If you don’t leave him, he’s going to kill you,” a former college roommate told her.

Christy was lucky to have these witnesses to her abuse. According to the U.S. Department of Justice Bureau of Justice Statistics, domestic violence is one of the most chronically underreported crimes. It’s believed that only 20 percent of all domestic abuse is reported. Based on the data available, 1 in 6 women (and 1 in 8 men) will experience some form of domestic abuse in their lives.

To an onlooker, Barry points out, leaving seems like the obvious choice when really it is the most dangerous time in this type of relationship.

“Victims are six times more likely to be murdered by their batterers when attempting to leave the relationship than at any other time,” Barry says. “And taking a life is really the ultimate form of power and control.”

Out of the 13,000 calls taken each year on the DAIS help line, many are from concerned family members, co-workers or friends, according to Barry.

“Often people will do things out of a very well-meaning place. But they might say, ‘If you don’t leave him, then I’m not going to talk to you anymore or not going to be your friend anymore,’” she says. “All that does is further isolate the victim and make them feel like it’s their fault.”

Parker agrees that often friends and family are stymied by how to help because the victim doesn’t agree or isn’t ready to leave.

“The best thing you can do is listen…and encourage them if they doubt themselves,” she says. “It’s okay to express fear and concern for them, but telling them what they should do is never helpful.”

One option to suggest if you know someone facing abuse is a support group such as those offered by DAIS and Harmonia.

“Deciding to make that call or come to support group can be very difficult,” Barry says. “Once victims do though, most find it incredibly validating.”

She explains that often people have been very isolated and think they’re the only ones who have ever dealt with something like this.

“For a lot of victims it can be the first time they really understand that it’s not their fault, and that their batterers are making decisions and choices to use these types of tactics,” she says. “It can be easier to see that in someone else, than it is to see it in yourself.”

Christy considers herself fortunate that she still had contact with a friend who  offered refuge from John, and listened as she described  the behaviors that she now realized were controlling and abusive. Having this immediate safe space allowed Christy to focus on her career, being 24 years old, and just moving on.

“I didn’t immediately deal with my emotions,” she admits. “When I did, I really had to learn to forgive myself because I let him do it. Some of those times that I can still see, hear and smell, like at that wedding, or on the bridge, I could’ve prevented those. But I just didn’t want to make a scene.”

Parker says that these feelings are common in victims that she helps. “Survivors often feel unreasonable guilt and shame, taking responsibility for how they’ve been treated,” she says. “It becomes progressively more difficult to sort out what they are responsible for and what isn’t under their control.”

Other long-term symptoms that Parker and Barry commonly see in victims are internalized anger, self-doubt and low self-esteem, which often manifest as depression and anxiety.

Barry recalls a victim who attended support group who said something that resonated with everyone in the group: The bruises and broken bones heal. But it was the emotional abuse that was an attack on her soul.

“That’s really what had kept her in that relationship for so long,” Barry says. “I think often people stereotype domestic violence as only physical abuse or sexual abuse. This allows them to minimize many of these really devastating psychological tactics that are being used against them that have long-term repercussions.”

Barry explains that when DAIS changed their Crisis Line to a Help Line a few years ago, it was done deliberately because people weren’t calling until the abuse escalated into something more violent.

“If you have a question or a feeling in the back of your mind, it can be really easy to minimize and silence that voice, particularly if your batterer has been minimizing your concerns,” she says. “Just call. That 24-hour help line is always available.”

As a survivor of abuse, Christy—now in a healthy marriage with a child and a successful career—understands the importance of creating a community or network of survivors.

“It has to be something we can openly talk about because the rate is so high,” she says. “Everyone knows someone that has been abused, they just aren’t aware of it.”

Common Emotional Abuse Tactics
Jennifer Parker, psychotherapist at Harmonia in Madison, says that survivors she works with identify emotional abuse as the most damaging form of control, with the exception of life-threatening violence. Common controlling behaviors:

Written By
BRAVA
More from BRAVA
Photographed by Hilary Schave Just as some species of plants are reborn...
Read More