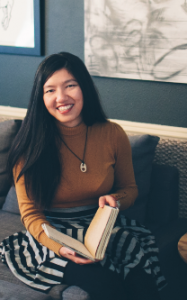 Madison artist Jenie Gao was horrified when she heard about the woman attacked, raped and left for dead on the Capital City bike trail last September. A month earlier, Gao had been attacked at nearly the same place on the trail. The knife-wielding man punched Gao in the stomach but she managed to escape.

She recalls feeling that “nothing would be done” even while she was undressing and relinquishing her clothes for police forensics testing. So Gao decided to do something herself to prompt positive change.

She and three other local women have launched Illuminate Madison, an online artistic collaboration and social platform to stimulate proactive, rather than reactive, initiatives to prevent violent crime. “Each of us who speaks up is also speaking for someone else who was either afraid or unable to speak up for him/herself. It starts with being willing to have a paradigm shift in order to achieve our ideals for what we want this community to be,” Gao says.

The next part of the conversation for Gao includes the installation of her art project—two solar light sculptures along the Capital City Trail later this month funded by a grant from the city of Madison. Gao’s bachelor’s degree from Washington University in St. Louis is in printmaking and drawing. But she’s stretched her range to include more three-dimensional artwork. Gao says her artistic journey is far from finished. “I am an artist and writer. I am a ‘Jenie’ of all trades. I believe art exists for dialogue; one that drives change.” illuminatemadison.com.

Written By
Rachel Werner
More from Rachel Werner
How many gallons of a beer are in a barrel? 31! And,...
Read More