“IT WAS A BORDER WAR!” Mary Riddle exclaims behind wire-rimmed glasses. Using her fingers to comb her short brown hair back from her face, she begins, “Tom wanted to mow the lawn and I didn’t want him to mow down the wildflowers!” So in 1977, a year after they began building their Madison home, the couple settled on a row of hostas to draw a border where Tom wouldn’t mow.

Since then, that simple border meant to save the wildflowers has turned their East Side home into an oasis where hundreds of hostas thrive in every shape and size. Each is labeled with the same metal engraved signs one would find at Olbrich Botanical Gardens.

Mary is clearing spider webs off the hostas with a feather duster as she and Tom lead me and my then young son (here on an impromptu field trip) along a winding path that takes us on a tour of heart-shaped frosty blue foliage, yellow and white variegated hybrids, some with dainty spikes of leaves. Most of these plants look like open hands held together gesturing an offering to the sun, their white centers fade out to buttery yellow beneath an overlay of green stripes. Graceful stalks of lavender and white lily-like flowers reach up through the centers.

“The first year in their newly built home, the Riddles had a yard sale and among the items they sold were hostas that Tom had “divided and divided” from the border. Every hosta sold.

“They’ve been selling hostas at their yearly Hosta Garden Companions garage sales ever since, “This year they’ll hold sales over four weekends in May in order to accommodate the more than 1,000 visitors they receive from all over Dane County and as far as Europe. Tom says his backyard is “an open-book catalogue.” Customers select the hosta they like from the full-grown plants in the backyard and then come around front to purchase a potted seedling of the same name.

“There is a beautiful wildness to the order of the hostas tucked in between rock. Attractive groupings of large hostas such as Empress Wu, whose leaves are beyond the size of dinner plates and miniature hostas such as Blue Mouse Ears whose tender cupped petals are aptly named. Tom points out elegant hostas that he cultivated from seed and named after loved ones such as his father “Companion George” and his mother “Companion Leona.”
How does Tom keep these different types of hostas straight-the species, sport and hybrids? “The retired postal worker, wearing a worn Wisconsin Hosta Society T-shirt and black suspenders, pauses for a moment. “I remember… because i care. That’s all,”he says.

He’s quick to offer that it is Mary, his wife of 40 years, who is the garden designer. And she is the storyteller.

Together they have created a sanctuary for others to enjoy as well. Mary’s eyes brighten when she shares how their garden touched the life of one woman living with cancer. Having lost her hair while undergoing treatment this woman was apprehensive about going out in public so the Riddles gave her a private tour. She told them how she felt “loved” in this healing space. A mother brought her blind daughter to spend time among the hostas for a “touch and smell tour” where she could feel the textures of fuzzy, quilted, puckered and pie-crust-rippled leaves.

There is no longer a border. Wildflowers and hostas live here together peaceably. A breeze drifts into the garden and so many hostas with whimsical and cheeky names: Striptease, Hanky Panky, Gypsy Rose, Liberty, Fireworks, Wheee! and Choo Choo Train look as if they are waving “Hello!” to my son. He stops at the pond, gathers breadcrumbs from Mary’s open hand and feeds the koi and goldfish darting out 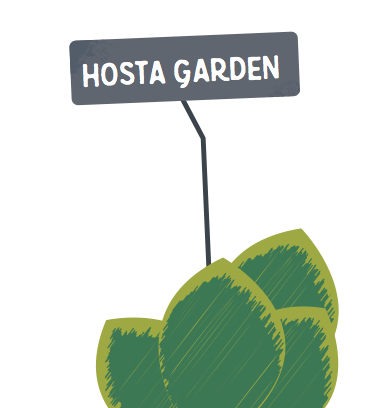 from beneath a gentle waterfall, iridescent tails slapping the surface of the water.

Written By
BRAVA
More from BRAVA
Helping a loved one face a serious illness is never easy, but...
Read More